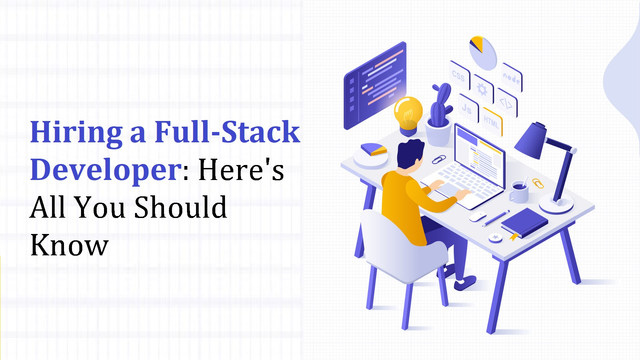 To improve new tools, languages, and protocols, there was a need to learn about the basics of technology in different software fields. Over time, even businesses started using their services to cut costs and work and get the most out of their operations.

When each role’s effects, risks, and evaluations are apparent, the development process is faster and less likely to go wrong. Hiring a Full-Stack Developer have a wide range of skills that help companies cut costs at different stages of making software.

What are Full Stack Developers?

There are many kinds of software developers, and Full-stack developer is one of them. But what does that word mean?

In software development terms, a “full-stack developer” is someone who can work in all of the layers. If you don’t understand what we mean by “layers,” please give us a moment. Full-stack engineers can work on all three levels, which is why they are in high demand.

What does it mean for a developer to be “full-stack”?

Creating a web application means putting together different web technologies. It is mainly made up of three parts:

This layer has to do with everything you can see with your eyes. The front-end layer uses three essential technologies: CSS for style, HTML for structure, and full stack JavaScript development for logic.

If you want to find someone with good front-end skills, you should look at their past work and look for websites that look nice and load quickly.

The front-end and back-end will be structurally separate if you make something in the SPA style. If the back-end API is already in place, then only front-end technologies must be used to build the application.

All of the parts that work on a server are part of the back-end layer. The end user can’t see them, but every advanced application needs them to work well and efficiently.

Sometimes, the back end is just an API service that handles text responses to each user request.
Since this layer is more technical, it is often hard to check. When evaluating back-end skills, you should look for a good design and documentation, the right way for endpoints to behave, the right way to store data, and good database design schemes. If you don’t have the right skills, you might need help checking all the information.

DevOps activities are all the things that need to be done to buy and run servers, update and deploy apps, and make the system’s capabilities bigger.

The people in charge of this layer must also make and manage caches, databases, cloud storage, and APIs. People’s DevOps skills can be judged by their experience managing servers, scaling systems, and taking care of cloud hosting providers.

You can find out if a person has worked with automatic monitoring of multiple servers, automatic cluster deployment, etc., in the past. Usually, it’s easy to get these kinds of experiences when you work for a big company because they deal with more traffic and have bigger budgets.

What is a Full Stack Developer’s Job?

It costs a lot of money to hire both front-end and back-end developers. And this is where full-stack developers come into play. Full stack developers know both the front and back end inside and out.

They know a lot about different kinds of programming, can design the UI/UX of an app, and can even take care of databases. One could say that a full-stack developer is a master and jack of all trades in programming for mobile apps.

When should you hire Full-Stack Developers?

When starting a new web project, it’s best to have one person who can do everything. They are good at coming up with solutions from scratch and putting app parts where they belong, which makes a basic software architecture.

If your team of developers doesn’t have a technical leader, it’s a good idea to hire a full-stack developer. Someone should be in charge of coordinating tasks and keeping an eye on what everyone else is doing. Full stack developers know a lot about your stack’s layers and sublayers.

Since there won’t be as many developers, this will help you save money on the costs of talking to them.

How much does a full-stack developer cost to hire?

A highly skilled Full Stack Web Development Company in India would have worked in the field for at least ten years. Because of this, they charge more than most front-end and back-end developers. But the developer’s location is the essential thing that makes a big difference in the price.

For example, you could pay between $8000 and $13000 per month for a full-stack developer from a developed country like the USA, UK, Australia, etc. But developers from developing countries with the same skills, knowledge, and experience will only charge $2000 to $5000.

Also, hiring developers from India is an excellent idea because you can find dedicated, hard working people with a lot of experience in the field.

How to talk to a Full Stack developer and hire one?

When you hire a Full Stack developer, there are a few things you should think about. First, you should know what kind of stack you want for your project. If you haven’t decided on one yet, you can be open to a few different choices.

When hiring for this role, you should get help from your CTO or the technical department since it requires a lot of hands-on work. When looking at the candidates’ resumes, please pay attention to what they’ve done in the past and look for a lot of experience with the software stack you chose for your project.

Also, consider the projects the candidates have worked on in the past. You can choose people who have worked on projects similar to your app or project from the shortlist.

After reviewing the applications and finding a few good candidates, the next step will be interviewing them.

The best places to find full-stack developers are

You can hire three different kinds of full-stack developers based on where they live. That is:

Local hiring means that you are looking for a Hire Full Stack Developer in your country or state, and that person is close to you. This is the most common way to hire people because it has a lot of pros. Since the developer is close to you, you can meet with them, interview them, and talk to them whenever you want.

You can hire them to work in your office or to work on their own. But most of the time, it’s expensive and hard to find local or offshore talent.

When you do this kind of hiring, you look for developers in your country. So, if you live in the US, you might find nearshore talent in Canada or Mexico. Nearshore talent is both skilled and affordable. There are also benefits to having similar culture and language and a close time zone.

Last, you can opt Full Stack Development Services who live far away, in other parts of the world. This is called “offshore hiring.” Employers in the US can find talent in India, Ukraine, Thailand, and other places. The main reason to hire people from different countries is to save money.

But you’d have to deal with things like not speaking the same language, different time zones, and virtual meetings.

It would help to decide what to outsource based on your company’s current needs and how much you can spend.