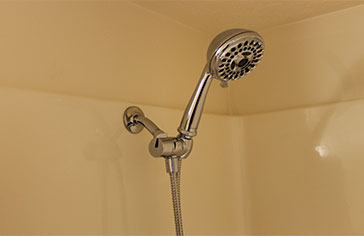 I’ve had so many shower heads over the years and finally found the right one. Functions, appearance, and handling Top. Of course, this also has its price. I can’t understand the bad reviews. Maybe it’s because you don’t read the instructions. Of course, it may be that after a while the beam is no longer as it was on the first day… but… they are also extremely small openings that can clog with calcareous water. But there is also a replacement plate that you can easily change to clean the other. That’s exactly what the instructions say. So first read then Metzen ! I am thrilled and have already recommended the shower head.

Alpenkraft is a small Austrian family business* that is behind the shower head. The shower head, which is filled with mineral beads, is currently the only product that the company sells. Of course, there are also mineral pearls to buy, but they are part of the shower head. The products are distributed by AVM Online Handels GmbH.

By the way, at Alpenkraft you have a 30-day money-back guarantee and free delivery!

Let’s get to the real heart of this post. The shower head. This is filled with mineral beads of clay and tourmaline. For this, the shower head   Quelle has two chambers. The shower head is already filled and only needs to be screwed on. What the Minderalperlen can do, and what especially the shower head can do, except save water, I will now go into specifics.

How much does the shower head cost?

Included in delivery is the shower head, which is already filled with the mineral beads, and another annual ration of the mineral pearls (2 fillings each). In addition, it contains instructions, and a second metal disc, as you have to clean them from time to time. In addition, Teflon tape is also included, if the shower head does not close tightly with your connection. But we didn’t need that!

Where can you buy the mineral pearls?

You can also get the mineral pearls at Alpenkraft in the shop. The 1-year package costs a regular 39.80 € currently but is also reduced by 50% to only 19.90 €. The mineral pearls are also available in a double or triple pack.